Last week we got a nice phone call from a customer who wanted to make sure we knew how appreciative he was for how we had helped him.  He told us how thankful he was for making things easier on him. He said if he had ordered the parts from some other place on the internet it would have taken him 7 days and he would have lost sleep over whether the bolts were going to arrive fully threaded or not. Then, if they were wrong, he would have had to send them back and wait another 7 days for the proper ones to come!  With us he was able to have a reliable contact person - who personally checked they were fully threaded - and his parts delivered the next day! He was so thankful for our service that he called us just to tell us...and it touched us deeply. So we're actually the thankful ones.


We're so thankful to have such nice customers! 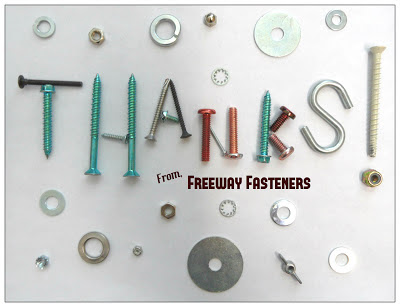 Email ThisBlogThis!Share to TwitterShare to FacebookShare to Pinterest
Labels: Look what we made, Our product, Thanksgiving